A family of very small (about 3mm) flies, some with prominent red eyes, characterised by a slow hovering flight in which the abdomen hangs down. All are associated with rotting fruit and vegetables or fermenting liquids. One species breeds in sour milk, for example, in the residue of forgotten milk bottles. 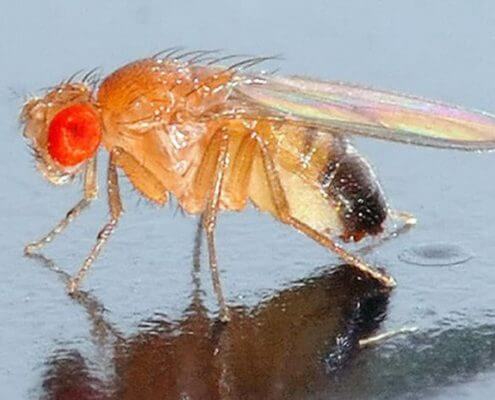 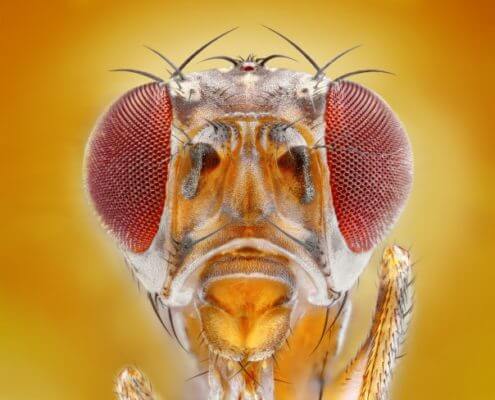 Remove all empty bottles or cans, and check for rotting fruit, vegetables or pools of spilt liquid. A fly killer may be used to control small outbreaks in the home.

Scientists believe a gene from the humble fruit fly could hold the key to developing a revolutionary new treatment for cancer.

The tiny insect – one of nature’s most simple organisms – is host to a gene that creates a protein which is capable of freely moving in and out of cells.

Experts have used the protein to genetically engineer a new drug to target cancerous stem cells, which are the most aggressive form of cancer cell because they are normally drug resistant and have the ability to multiply.

Professor Agamemnon Epenetos of Trojantec Ltd, a spin-off company of Imperial College London, said: “It’s a very humbling thought that such a simple being as a fruit fly could potentially hold the key to such an enormous advance in cancer treatment.

“The next time you are on holiday and you see a fruit fly buzzing nearby you may want to think twice about swatting it away.”

The gene – known as ‘antennapedia’ gene – is responsible growing the fruit fly’s antenna. It has already been used to create a potential anti-malaria drug by a different team of researchers.

Professor Epenetos said: “The fruit fly is of great interest to scientists because it is a simple structure. It is like working on a bicycle rather than a Ferrari so it is much easier to understand how it works.

“Nature has a way of presenting solutions to some of the most complex problems. This is an example because cancer stem cells are like an evil queen bee, causing the disease to multiply and spread.

“By taking the gene from the fruit fly we have created a way of targeting the cancerous stem cells, hopefully without harming other stem cells that are healthy.

“We use the protein as a transporter between cells and we have programmed it to deliver the medical equivalent of gold and diamonds.”

Professor Epenetos is chairman of a London-based Trojantec, which is developing the new drug, called TR4.

He says his team is now seeking funding from investors in order to begin clinical trials of the treatment, which is so far untested in humans.

If successful, the drug could prove highly effective in fighting a range of different cancers at genetic level, including bowel, ovarian and breast cancers.

The revolutionary research has been partly funded by the Biotechnology and Biological Sciences Research Council. If successful the new drug could be available in three to five years.

Having problems with fruit flies?

All photos copyright their respected owns, photos provided for educational & identification purposed only.